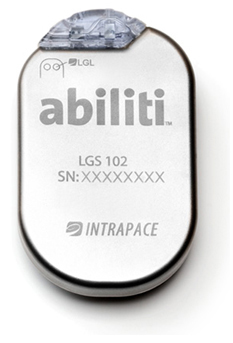 The Ability IPG connects to the stomach via a lead that integrates the food sensor and stimulation electrodes. The sensor is able to detect food and drink and can trigger the abiliti stimulator device to create a feeling of fullness. These eating events, along with physical activity the patient engages in, are automatically recorded and available for downloading to a personal computer using the connect.abiliti Wand.