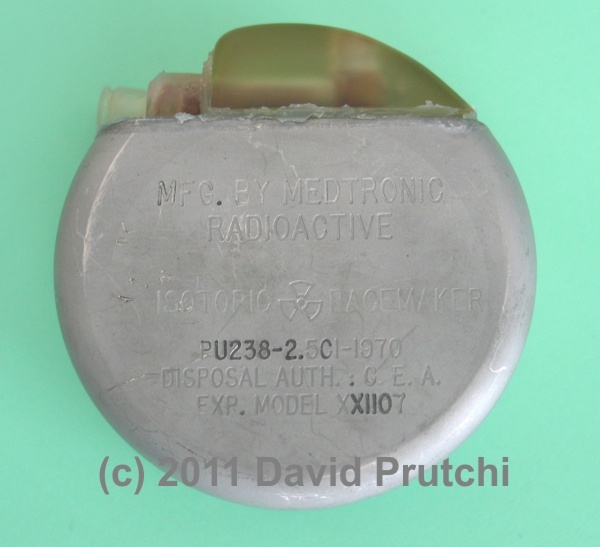 In the late 1960s Medtronic – today the largest manufacturer of implantable medical devices in the world – teamed up with Alcatel, a French company, to design a nuclear-powered pacemaker. The first human implant of the device took place in Paris in 1970.

The nuclear battery in the Medtronic device used a tiny 2.5 Ci slug of metallic Plutonium 238 (Pu-238). The radiation produced by the Pu-238 bombarded the walls of its container, producing heat that a thermopile then converted to an electrical current. A thermopile is a stack of thermocouples, which are devices that convert thermal energy directly into electrical energy using Seebeck effect. A thermocouple is made of two kinds of metal (or semiconductors) connected to each other in a closed loop. If the two junctions are at different temperatures, an electric current will flow in the loop.

Plutonium-238 decays with a half-life of approximately 85 years. As such, the radioisotope thermal generator (RTG) using this material will lose a factor of 0.81% of its capacity per year. Although the thermocouples used to convert thermal energy into electrical energy degrade as well, the electrical output of the complete assembly degrades by only 11% in 10 years. This pacemaker still works well 40 years after it was manufactured.

NOTE: This pacemaker is in the private collection of an authorized company outside of the US. I do not personally possess any live atomic pacemakers or RTGs.

Click here to find out what to do if you find a nuclear pacemaker. 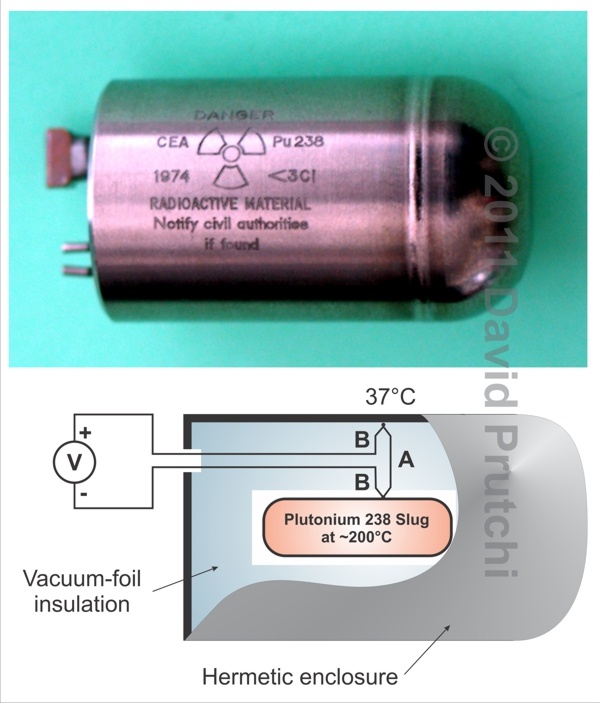 In a thermocouple, a voltage - the thermoelectric EMF - is created in the presence of a temperature difference between two different metals or semiconductors. In the isotopic thermoelectric generator, many thermocouples are arranged in series/parallel to form a thermopile which produces useful power levels. One of the junctions of each thermocouple (e.g. T1) is exposed to the heat generated by the decay of the Pu-238, the other junction (e.g. T2) is at body temperature.