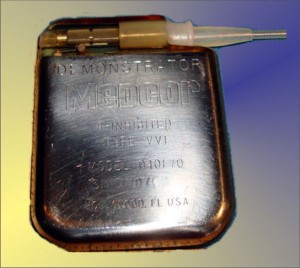 Medcor was established in Hollywood, FL in 1969, and began developing pacemakers, lead and accessories in 1971.  By 1975 it had a series of lithium-powered pacemaker in the market, but they never became popular with physicians.

On July 1980, Daig Corporation of Minnetonka, MN acquired Medcor with the expectation that Medcor pacemaker technology could be profitably marketed.

Daig had hoped to market a new line of Medcor pacemakers, but significant electronic malfunctions were encountered which foreclosed further development Medcor’s pacemaker product line. As a result of malfunctions in the first pacemaker line, FDA approval was withheld on a second Medcor line of pacemakers due to similarities in product design.

Mark Christensen – who worked at Daig Corporation from 1980 to 1986 – sent me a kind note with some additional information:  “As you note in your comments on Medcor, it was purchased by Daig in 1980 but remained as a separate business. Daig’s financial crisis in 1981 caused Daig to go into Chapter 11 Bankruptcy and Medcor went to Chapter 7 – liquidation and was sold at auction in late 1981. No pacemaker company bought any of the assets. Daig reorganized, diversified into EP catheters and was bought by St Jude Medical in 1996 (15 years later).”   Thanks Mark!