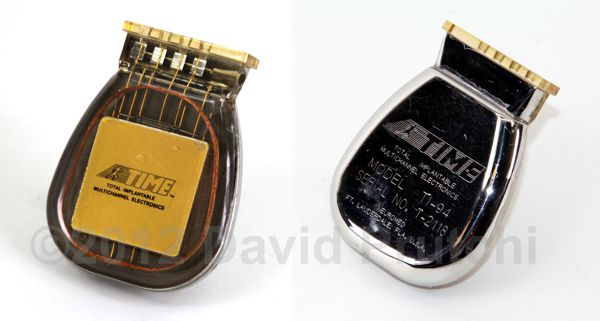 Neuromed was formed in 1980 with an initial capitalization of $150,000 by Bill Borkan through money obtained when Borkan`s parents took out a second mortgage on their home. Borkan’s desire to help his sister, Jennie, a cerebral palsy patient, got him started in neurostimulation technology. In the next few years, Neuromed developed and marketed a RF-powered implantable spinal cord stimulator, along with its external radio frequency transmitter.

Throughout the 1980s, development of more advanced devices was ongoing at Neuromed. My friend Daniel Villamil from CCC Medical has in his collection one of these more modern units, which he lent to me for photographing. The “Total Implantable Multichannel Electronics” (TIME) spinal cord stimulator shown in this picture went into clinical trials around 1988. This was a device that was internally powered by its own battery. However, it could also be RF-powered after the eventual battery failure.

This device was one of the first to feature four stimulation channels, and was paired with Neuromed’s tetrapolar stimulation lead described in US Patent Number 4,379,462. Most spinal cord stimulators until then were simple single-channel units.

Quest Medical of Texas acquired Neuromed from Bill Borkan and his brother in 1995 for $15.2M in cash plus stock. This purchase resulted in the 1996 formation of Advanced Neuromodulation Systems (ANS). In 2005, St. Jude Medical purchased ANS for $1,353.9 million.

As an interesting aside, Neuromed developed a deep-brain stimulator for which it received FDA approval in 1988. A Sun Sentinel newspaper article on December of that year, which describes the use of the deep-brain device for the treatment of chronic pain and intractable epilepsy, states: “Borkan acknowledged that the market for the device is relatively small, and estimated that the worldwide demand for such implants is about 400 to 500 units a year.” Today, DBS is approved for the treatment of chronic pain, Parkinson’s disease, tremor, and dystonia, bringing up the number of yearly worldwide DBS implants into the tens of thousands.