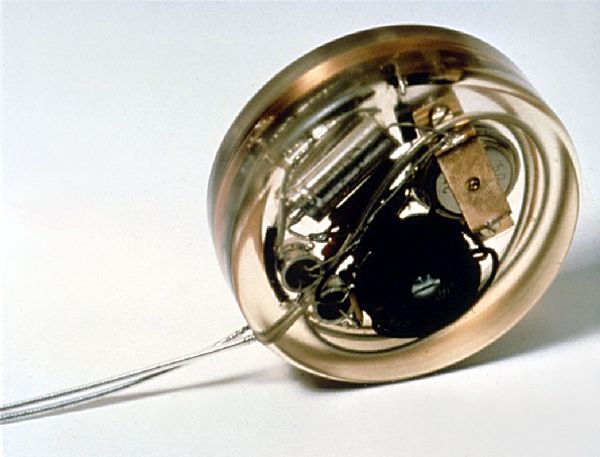 This is a picture of the first pacemaker to be implanted in a human patient.  It was developed by Dr. Rune Elmqvist (1906–1996), a physician by training, but working for the Swedish company Elema-Schonander as an engineer.   Dr. Elmqvist  developed the device in cooperation of Åke Senning, senior physician and cardiac surgeon at the Karolinska University Hospital in Solna, Sweden.

The story is well summarized in Siemens’ historical archive:

“In fall 1958, at the age of only 43, Arne Larsson in Sweden appeared to be nearing the end of his life. He was suffering from cardiac arrhythmia which had worsened as a result of a viral infection. His heart was beating at a rate of only 28 beats a minute – a healthy heart beats approximately 70 times a minute. Larsson was constantly losing consciousness and had to be revived 20 to 30 times a day. There was scarcely any hope of a cure. But his wife Else-Marie refused to accept her husband’s impending fate. She read in the paper that the cardiologist Professor Ǻke Senning in the Karolinska Hospital in Stockholm was working with the doctor and engineer Dr. Rune Elmqvist on an implantable pacemaker. Ms. Larsson was convinced that this was her husband’s salvation – although up to then the developers had only experimented with animals and there was no device suitable for the human body.

Thanks to his wife’s powers of persuasion, Arne Larsson received his first pacemaker in a secret emergency operation on October 8, 1958. Dr. Rune Elmqvist, the developer of what was the first pacemaker in the world, was an engineer at Siemens-Elema and had previously worked as a cardiologist. For lack of time, he coated the components of the first device with epoxy resin in a shoe polish tin. Two electrodes connected to the pacemaker provided the energy to stimulate the heart. This first model had to be replaced by a new one after only a few hours. The technology however rapidly improved and models of increasing complexity met the specific requirements of a malfunctioning heart. Today pacemakers with a life of ten years are standard in modern cardiology.

Arne Larsson lived to be 86, surviving even the man who saved his life, and used a total of 26 pacemakers. Thanks to these small devices he was soon able to live an active life which once again included cycling, sailing, dancing and air trips. At a congress in Vienna in 1983, Dr. Rune Elmqvist commented on pacemaker technology as follows: “I must admit that at first I viewed the pacemaker more or less as a technical curiosity. So it was fantastic to see its tremendous development.” In 1994 Siemens sold its entire pacemaker business to the American company St. Jude Medical.” 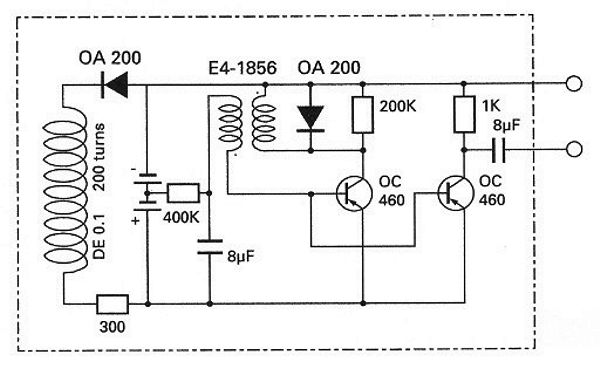 The circuit developed by Dr. Elmqvist is described by Dr. Oscar Aquilina in “A brief history of cardiac pacing” (Images Paediatr Cardiol 2006;27:17-81):

“The pulse generator delivered impulses at an amplitude of 2 volts and a pulse width of 1.5 ms. The pulse rate was fixed at a constant rate of 70 to 80 beats per minute. The energy utilised was minimised since Elmqvist managed to obtain a few of the first silicon transistors imported into Sweden. These were more efficient than the older germanium transistors. With them Elmqvist designed a stable and efficient blocking oscillator with a small power consumption.

Several types of primary battery cells could have been used. The Ruben-Mallory cells with zinc as the anode and mercuric-oxide as the depolarizer were a possible choice. They had been invented during World War II for army field telephones. Although the cell potential remained constant, these cells had a short lifetime and released hydrogen gas at the zinc anode. The effect of this gas in a cell encapsulated in plastic was not known. For these reasons, nickel-cadmium rechargeable cells were then chosen. Two cells of 60 mAh each were sealed, encapsulated and connected in series.

Recharging was accomplished inductively. A coil antenna with a diameter of about 50 mm was connected to the cells via a silicon diode. This was inductively coupled across the patient’s skin to a large external flexible coil 25 cm in diameter attached to the patient’s abdomen with adhesive tape. Recharging was accomplished by a 150 kHz radio frequency current generated by an external mains-powered vacuum tube device connected to the external coil. The pacemaker required charging once a week for 12 hours

The entire unit was entirely hand-made and consisted of the nickel-cadmium batteries, the electronic circuit and the coil recharging antenna. These were encapsulated in a new epoxy resin (Araldite) produced by Ciba-Geigy, which had excellent biocompatibility. The approximate diameter and thickness became 55 mm and 16 mm respectively, according to the dimensions of the ever so popular shoe polish can from Kiwi. Elmquist in fact produced two such units using these cans as moulds!”

The first implant worked for only eight hours, and the second one, also done in Stockholm in 1958 lasted for one week.  Assisting in the implants was Dr. Orestes Fiandra, a young Uruguayan physician training under Dr. Åke Senning .  Upon his return to Uruguay, on February 2, 1960, Dr. Orestes Fiandra (the founder of CCC del Uruguay) and Dr. Roberto Rubio accomplished the first succesful long-term human implant of a pacemaker. The pacemaker was manufactured by Dr. Rune Elmqvist, and was implanted in a 34-year-old patient with AV block. This unit worked successfully for nine and a half months, until the patient died of sepsis from an unrelated infection. 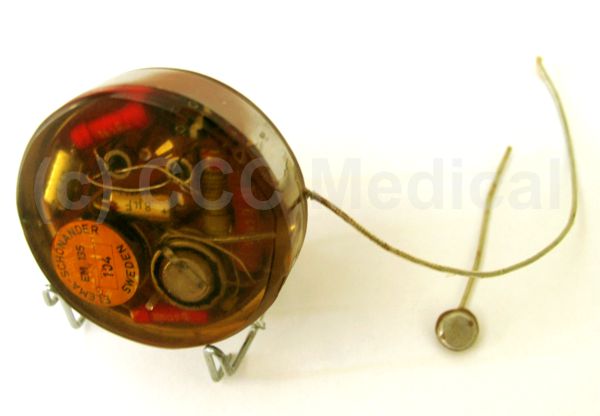 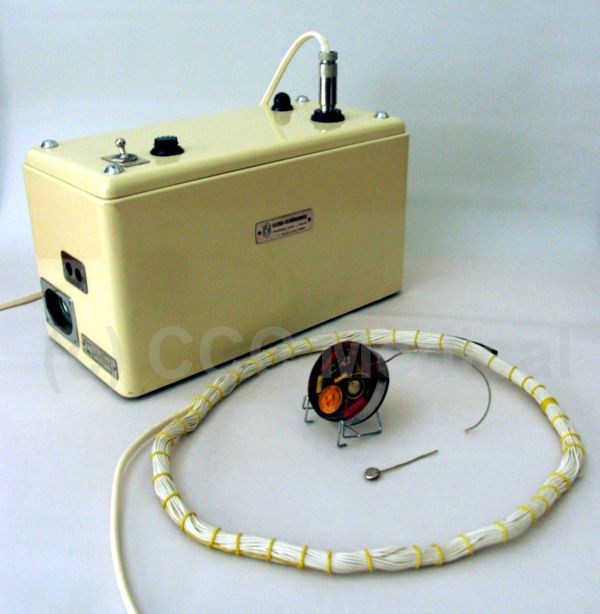