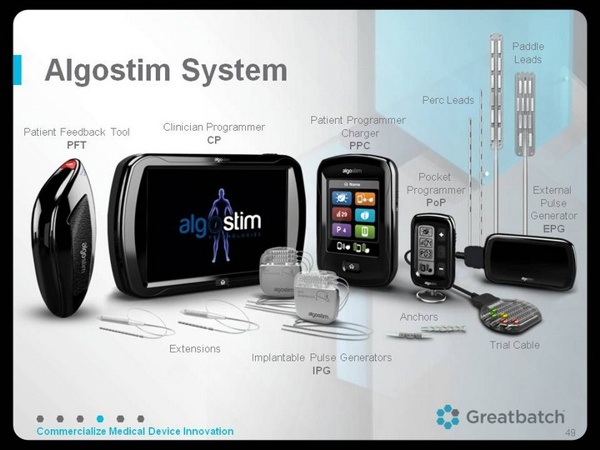 Greatbatch Medical, which moved its headquarters to the Dallas, TX area last year, announced that it has set a target of at least 5%/yr organic growth.  To accomplish this growth, the Company recently announced consolidating operations of its various divisions in order to create efficiency.

In addition however, Greatbatch is diversifying from being strictly a developer of implantable-grade components into a firm capable of developing complete medical devices.  Greatbatch’s CEO Thomas Hook announced in March 2013 that Greatbatch is internally developing its own spinal cord stimulation system.  The device, called Algostim, is nearing completion of development and will be moving into the commercialization phase.  The company is looking for a partner to take the Algostim device into the $1.4 billion spinal cord stimulation market, which has been growing at more than 10%/yr.

Click here for an extract describing Algostim from Greatbatch’s investor day of March 2013.