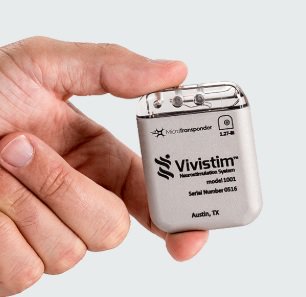 Back in 2013 I reported about MicroTransponder’s Serenity System™, which pairs Vagus Nerve Stimulation (VNS) with listening to tones. During the therapy, an individual sits in a comfortable chair and wear headphones. They listen to tones while receiving small bursts of neurostimulation from the implantable vagus-nerve stimulator. UT Dallas says that “preclinical tests demonstrated that this approach “rewires” damaged brain circuitry associated with tinnitus, potentially yielding long-term reversal of symptoms. The initial human trial in Belgium provided encouraging results.”

More recently, MicroTransponder developed the Vivistim™ system intended for the treatment of stroke.   The implant is based on the idea that synchronizing vagus nerve stimulation with movement increases neural plasticity in the brain, resulting in enhanced recovery.

In May 2017 MicroTransponder presented results from its Vivistim™ Stroke Rehabilitation trial. The objective of this multicenter, double-blind, randomized, active-controlled trial was to improve upper limb mobility in stroke survivors suffering chronic disability. The data showed 75% of patients had a clinically meaningful response on the Fugl-Meyer Upper Extremity Scale (FMUE) at the end of a six weeks of physical therapy compared to 33% for the control group. 90 days after the six weeks of physical therapy ended 88% of VNS patients had responded compared to 33% in the control arm. And during the long-term portion of the study average FMUE scores continued to increase, with the 6 month and 9 month data showing further gains. All responders indicated they believed their overall health had improved and were satisfied with the therapy.

At the same time, MicroTransponder announced that it had received IDE approval from the FDA to run a 120-patient pivotal trial on the Vivistim™ system. 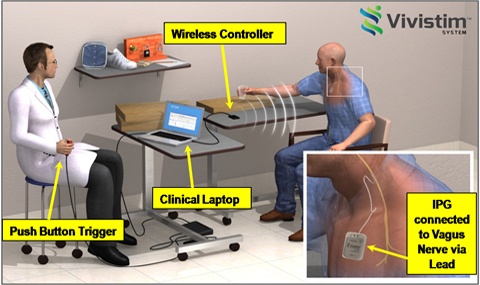