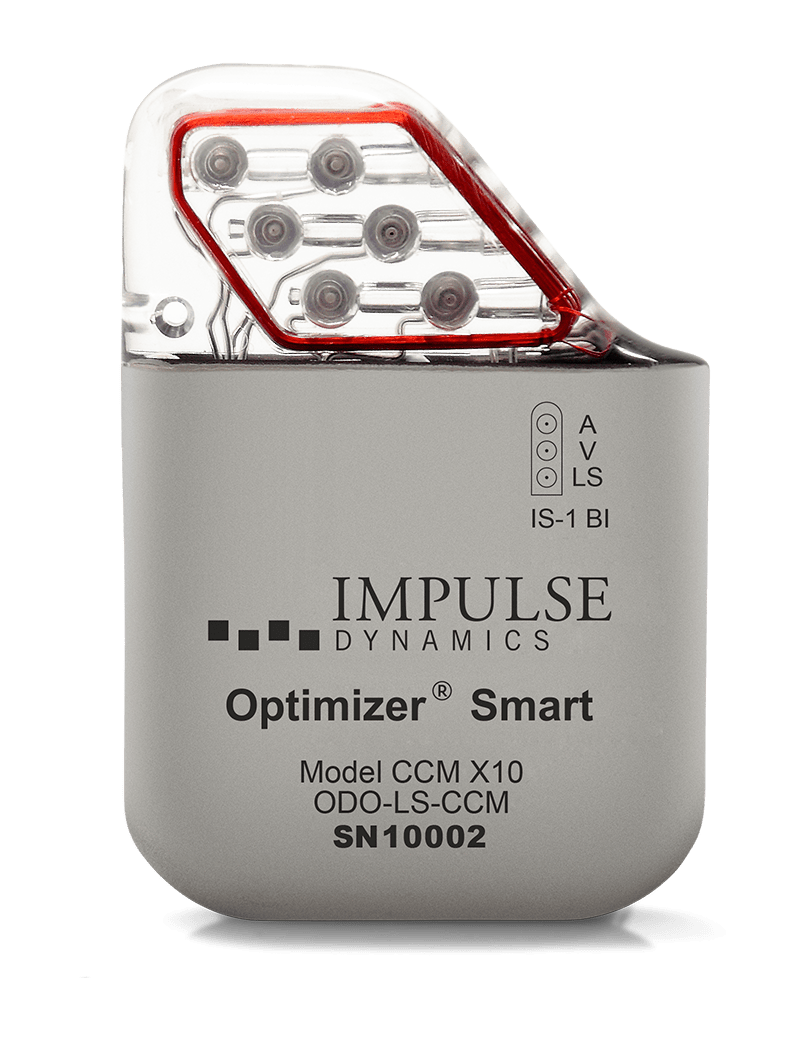 From the press release:

“The Optimizer Smart System offers a new therapy for heart failure patients with reduced ejection fraction who are still suffering from the debilitating effects of the disease despite guideline-directed medical therapy. New algorithms in the two-lead version of Optimizer Smart deliver therapy just as the previous device did, but no longer require inputs from an atrial lead. Recent evidence from the FIX-HF-5C2 clinical study indicates that patients who received the two-lead system experienced better outcomes, including improved peak VO2 (a common measure of exercise tolerance), and fewer device-related complications.

“I’ve had the opportunity to provide CCM therapy using both the two-lead and three-lead Optimizer Smart systems. In my opinion, this approval represents an important advancement that will make this breakthrough therapy even more accessible to patients,” said cardiac electrophysiologist Dr. Thomas Mattioni, Scottsdale, Ariz. “Patients with Class III heart failure who remain unresponsive to conventional therapy have few options, and CCM is an important addition to our armamentarium in this respect. I have several patients who have had a remarkable response to CCM, and think it is an option providers should be able to consider for patients who are appropriately indicated.”

CCM is a unique electrical therapy delivered during the heart’s absolute refractory period, which is just after the heart muscle contracts. In contrast to a pacemaker or defibrillator, CCM works by modulating the strength of the heart muscle contraction rather than the rhythm. The Optimizer Smart System is the first and only CCM device approved by the FDA to improve 6-minute hall walk distance, quality of life and functional status of NYHA Class III heart failure patients who remain symptomatic despite guideline directed medical therapy, who are in normal sinus rhythm, are not indicated for CRT, and have a left ventricular ejection fraction (LVEF) ranging from 25 to 45 percent. Only 30 percent of moderate to severe chronic heart failure patients are candidates for CRT, which historically has left 70 percent of patients with few options to help them manage their disease.

“The benefits of Cardiac Contractility Modulation have now been proven with evidence-based medicine and in my clinical practice,” said Dr. Ben D’Souza, Assistant Clinical Professor at Penn Medicine, Philadelphia. “Patients already receive significant benefit from this therapy in its present form and removing the need for an atrial lead is an important advancement for both patients and providers.”

Designed to address a significant unmet medical need in heart failure, the Optimizer Smart System received Breakthrough Device designation from the FDA in 2015. It was the first Breakthrough Device to go before the Circulatory System Devices Panel of the FDA’s Medical Devices Advisory Committee, on Dec. 4, 2018, receiving a unanimous recommendation for approval based on their assessment of benefit versus risk. Optimizer then went on to receive FDA approval on March 21, 2019.

“With the recent commercial launch of this technology in the U.S. market, we have already seen patients make decisions for CCM therapy that clearly indicate and reinforce the significant gap in therapeutic options for this large population of patients in need. This improvement in our platform allows us to bring innovations that deliver hope to more patients than ever before,” said Chris Baer, Vice President of Commercial Operations, Impulse Dynamics.

About the Optimizer Smart and CCM Therapy

CCM is the brand name for Cardiac Contractility Modulation, the non-excitatory electrical therapy delivered by the implantable Optimizer Smart device during the absolute refractory period of the heart cycle to improve systolic contraction of the heart. The Optimizer Smart has been implanted in more than 4,000 patients and is currently available in the U.S., Europe, China, Brazil, India and more than 40 other countries around the world. Impulse Dynamics has completed numerous clinical studies of the Optimizer Smart, including several randomized controlled trials. The results have been published in more than 80 papers in leading medical journals.”