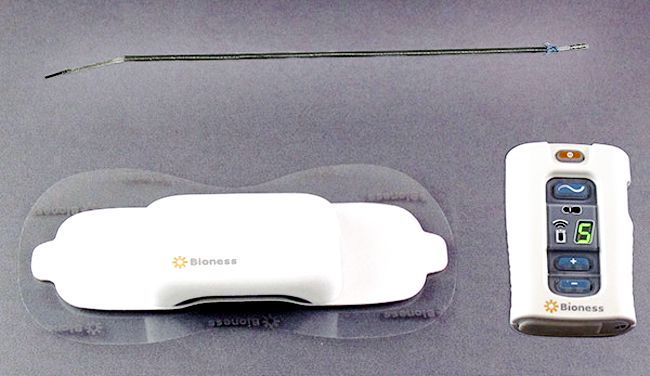 Bioness announced that its StimRouter received the CE-Mark to Treat Fecal Incontinence.

Unlike most externally-powered neurostimulators, the StimRouter is not powered by RF received from the external transmitter. Instead, the external pulse transmitter is more like a TENS unit with gelled electrodes applied to the skin. The implant has no electronic components. It is just a lead that has a coil electrode that intercepts part of the current between the TENS electrodes, and routes the captured current to small electrodes in contact with the target nerve at the distal end of the lead.

“The StimRouter for fecal incontinence is a minimally invasive, relatively easy implant that places the lead electrodes next to the Nervus Tibialis,” said Dr. Concha Perez, Hospital Universitario de la Princesa, Madrid. “The patient we implanted, referred from Dr. Cecilio Santander, a gastroenterologist, shows an important, significant improvement in the patient’s QoL with a more than 90% event free life.”

The StimRouter previously received CE mark approval in February 2014 for the treatment of chronic pain of peripheral nerve origin as an adjunct to other non-drug therapeutic options, and again in February 2019 for the treatment of Overactive Bladder (OAB). When patients undergo the StimRouter implant procedure, it requires one incision and is often completed in 30 minutes using only local anesthesia. A small, hand-held remote allows the patient to wirelessly control and customize their therapy.