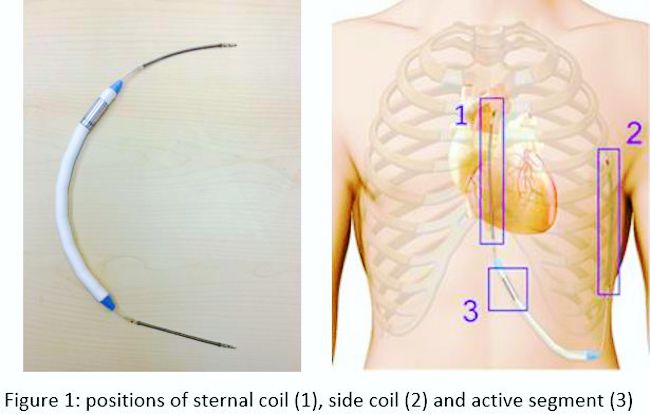 A few years ago (2016, I think), a mockup of a curious device reminiscent of the InnerPulse PICD was displayed at HRS by NewPace, a company based in Caesarea, Israel. Their Implantable Subcutaneous String Defibrillator (ISSD™) device is meant to be implanted subcutaneously with no leads connected directly to the heart. It is described by NewPace as “unitary and flexible: totally integrated (no can, nor leads) and flexible string shape device”. According to NewPace, the device will be rechargeable, requiring a one hour session once yearly, and will have a longevity of 10 years before needing replacement.

In contrast to standard S-ICDs, the device could be easily implanted with only 3 small incisions and no need to create a pulse generator pocket. This implant is expected by NewPace to have minimal anatomical protrusion, resulting in better patient comfort and aesthetic appearance compared to a standard S-ICD.

At HRS 2017, NewPace presented a human study whereby the electrode configuration envisioned for the ISSD was used to defibrillate patients using an external defibrillator prior to the implantation of a standard ICD. In this acute study, the electrode configuration proposed for the ISSD resulted in an average DFT of 26J (n=22, SD=11J). The abstract described a protocol with 70J as the maximum energy to be used for DFT, and the presenter discussed the probability of defibrillation success at 60J making me believe that the ISSD will have its maximum energy at 60J (as a reference, Boston Scientific’s EMBLEM S-ICD delivers 80J shocks)

Dr. Neuzil from the Czech Republic, who conducted the acute study on the electrode configuration, gave some additional details on the proposed device:

“The configuration consists of an integrated and flexible structure with a string which is 45fr, including the active segment, and two shocking coils of 10cm each at 15fr and 9fr. The two coils are to the mid sternum and lateral axillary line. These are connected to the cable string, which contains all the batteries, capacitors, and communication system. So it is one body. This is implanted subcutaneously.”