The Cardio Care II Pacemaker was American Optical’s second implantable device.  It was an improved version of the Cardio Care pacemaker.  Besides improvements to the circuitry, the circuit board was enclosed separately inside a hermetic can within the epoxy encapsulation. END_OF_DOCUMENT_TOKEN_TO_BE_REPLACED 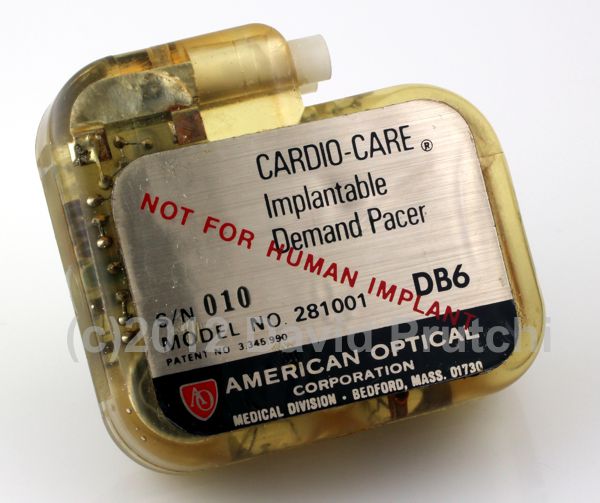 From Kirk Jeffrey’s Machines in our Hearts(2001):

“Berkovits in 1963 designed a sensing capability into the pacemaker. His invention behaved exactly like an asynchronous pacer until it detected a naturally occurring R wave, the indication of a ventricular contraction. This event would reset the timing circuit of the pacemaker, and the countdown to the next stimulus would begin anew. Thus the pacer stimulated the heart only when the ventricles failed to contract. It worked only ‘‘on demand.’’ As an added benefit, noncompetitive pacing extended the life of the battery. END_OF_DOCUMENT_TOKEN_TO_BE_REPLACED 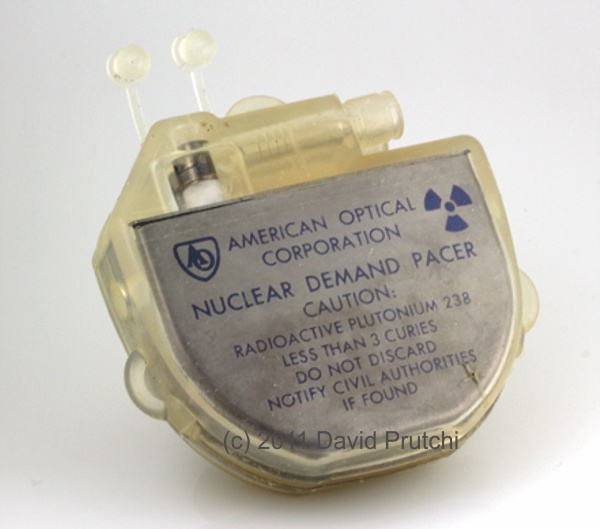 Barouh Berkovits at American Optical Co of Boston, MA designed the first “Demand Pacemaker” – what we now know as a VVI pacemaker.  As other companies in the 1970s, American Optical developed a nuclear-battery-powered version of their pacemaker.

American Optical used a 3Ci Pu-238 Radioisotope Thermal Generator (RTG) produced by Fred Hittman’s Hittman Nuclear Development Corp. (Model NB-200).  It consisted of a tiny 8 Ci slug of metallic Plutonium 238 (Pu-238). The radiation produced by the Pu-238 bombarded the walls of its container, producing heat that a thermopile then converted to an electrical current. A thermopile is a stack of thermocouples, which are devices that convert thermal energy directly into electrical energy using Seebeck effect. The thermocouple was made of two kinds of metal (or semiconductors) connected to each other in a closed loop. If the two junctions are at different temperatures, an electric current will flow in the loop. END_OF_DOCUMENT_TOKEN_TO_BE_REPLACED