Conceived by physicians Michel Mirowski and Morton Mower, and supported by Dr. Stephen Heilman, the first automatic implantable defibrillator was developed and manufactured under the name of “AID” by Medrad/Intec Systems in Pittsburgh, PA.

It was encased in titanium and hermetically sealed with a laser beam weld. It had a volume of 145 ml and weighed 250 gm. The device was powered by lithium batteries which had a projected monitoring life of 3 years or a discharge capability of 100 shocks.

The ICD was designed to detect ventricular fibrillation and sinusoidal ventricular tachycardia, and it attempted to using a truncated exponential 25 Joules pulse.  The device could recycle three times during a single episode with the third and fourth pulses delivered at 30 Joules.

The device was meant to be connected to electrodes made from titanium and coated with silicone rubber. One defibrillating electrode was located intravascularly in the superior vena cava (SVC) at the right atrial junction. The second electrode had the configuration of a rectangular patch or a cup and was positioned over the cardiac apex.

First implants of the device were conducted at the Johns Hopkins Hospital in Baltimore in 1980.  These devices were not programmable and manufactured on an individual basis.  The AID was then improved with rate-counting circuitry and could synchronize shocks with the R-wave.  Efforts were also made to reduce the recycling time after a failed shock.  The new device was called the AID-B (shown in the picture), but was still manufactured according to individual specifications. 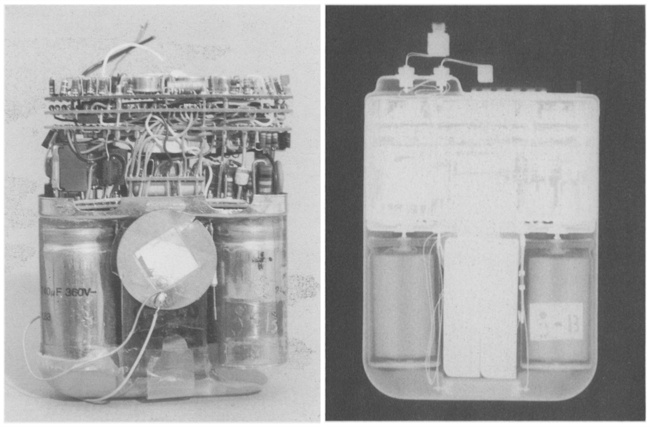 Acknowledgement:  Thanks to Tim Carroll and Randy Armstrong at Velentium for allowing me to take a picture of this device in their collection.